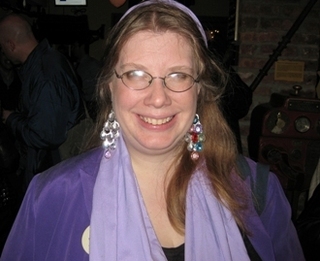 February kicked off to a great start with the most recent KidLit Drink Night. The 14th Annual Society of Children's Book Authors and Illustrators Winter Conference in New York City is taking place this weekend, so there were a lot of authors, illustrators, editors and librarians in attendance. The festivities took place at the Wheeltapper Pub at 141 East 44th Street, starting around 8:30 p.m.

Stephanie Whelan is a librarian at the Seward Park Library of the New York Public Library. As we talked, it became clear that we knew a lot of the same people ("hello, Diane Dietz") and then it suddenly dawned on both of us that I had actually interviewed Stephanie six years ago when I was first thinking about becoming a librarian. It could have been an awkward moment, but Stephanie was very gracious about it. Keep an eye out for a children's science fiction blog from Stephanie Whelan in the near future.

I also met Maria Simon and Michael Santangelo. Maria, a librarian from Bowling Green, Ohio, was in town for the SCBWI conference. She is working on a nonfiction picture book. Michael Santangelo is a librarian at the Brooklyn Public Library. I later learned that he was named a Library Journal Mover and Shaker in 2011.

Finally, I had a great talk with Isabelle LaRue. Isabelle is a building engineer and the creator, producer and host of the original DIY home design web series ENGINEER
YOUR SPACE. She is the winner of the 2013 International Academy of Web Television (IAWTV) award for Best Educational Web Series. Her web series gives tons of tips for improving the look of your rental apartment. She grew up speaking French, but learned to speak English as a child by reading the complete Nancy Drew series (followed by the works of Stephen King).

KidLit Drink Night tends to happen every month or so. All are welcome. You can get on the mailing list by sending an email to nyckidlitdrinks at gmail dot com. I look forward to seeing you there.