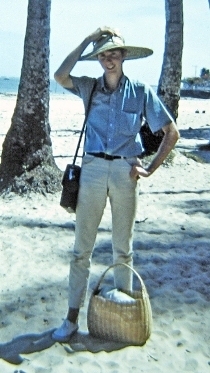 Gregory Holch is a children's book author, editor, and recent library school graduate. He was born in Japan, grew up in Connecticut, and lived for a year in Brazil as an American Field Service exchange student during high school.

After attending Hampshire College, he received a B.A. in English from Manhattanville College and an M.A. in American Civilization from New York University. He has recently received a Master of Science Degree in Library and Information Science from the Palmer School at LIU.

His first national publication was a letter to the editor of Teen Magazine, which he wrote under a pseudonym while he was in high school. (Teen had misspelled the Portuguese word for "thank you.") His first publication under his own name was a very short story called "Magic?" that was published in Seventeen Magazine while he was in college.

Greg Holch is a winner of the Mademoiselle Magazine Guest Editor competition, the same contest that Sylvia Plath wrote about in The Bell Jar years earlier. He worked for many years as a children's book editor, and has also been the editor of house and home products at a major consumer website. Currently he is a Senior Librarian at a branch of the New York Public Library. He is the author of The Things with Wings, a children's fantasy novel, and co-author of Jungle Jokes, a children's joke book.

He lives in New York City with his wife and children.

For more information about Greg Holch, see the FAQs page.